By Jan Johnston14 December 2021No Comments

The Lost Crypt Escape Room encompasses the spirit of Aspire, showcasing the charity’s innovative and entrepreneurial approach. In the second entry from our ‘Diaries from the Lost Crypt’, Bobbie Hoogendijk and George Henderson discuss how they helped design, build, and bring the Escape Room to life.

George went to school on the Isle of Wight and Bobbie is from the Netherlands, they now live in St Anton, Austria, where they designed and built their first Escape Room.

‘Our backgrounds are originally in Computers and Technology [George] and Hotel Management [Bobbie] but after a few years of working in the mountains as a winter mountaineering guide and ski instructor, we both decided – separately – that office jobs weren’t for us. We both love the mountains and Bobbie also really likes to create things with her hands.

We met in Austria, during a ski season, and wanted to stay… but we weren’t quite sure what to do here in Summer – as there’s no snow obviously! We knew we wanted to be self-employed in the long term so we started thinking about how we could use and combine our skills which would be beneficial for us.

There was a lot of brainstorming, then we came across a great location where we thought an Escape Room could work well. We had designing Escape Rooms on our ‘short list’ of what we wanted to try and so we took the leap and gave it a go. [Currently, we have two other Escape Rooms projects on the go, one we are moving from another location, and one is a brand-new room.]

At this point, when we made our first ‘puzzle flow’ [as we call them] we hadn’t played any Escape Rooms, aside from the one that Bobbie had played five years ago. This was deliberate as we didn’t want to let other people’s ideas for games influence what we wanted to do or create. Since then, however, we’ve really got into playing them and have now played around 30 – 40.

Designing a room is a combination of different things. The location is a big influence for us – we normally visit a location first [with the Lost Crypt it was a bit different!] and then start brainstorming what would fit and work well as a theme in that location. Then we start developing small puzzles, and we ultimately make it bigger and bring it to life with more complexity.

It makes it exciting developing a room this way, as something normally feeds your imagination. Lots of older locations have unique and intricate features where you can build in secret doors or hidden compartments or, in the case of Aspire, you uncover ‘hidden’ features that can be included. Then it’s a combination of thinking what will make people go ‘wow that’s pretty cool’ … along with a lot of trial and error!

Our connection to Aspire is through George’s relationship with Jan Johnston and her Husband Tony. Tony was George’s IT teacher at school. George was on the Island during the summer of 2020 visiting family [in between ‘lock downs’] and over dinner they discussed our Escape Room that we had just opened and the possibilities of building one on the Island. Jan thought it was a concept that Aspire could potentially be interested in hearing about so she made an introduction initially with Trevor [CEO] and then we met JD and Steve on the Aspire management team via zoom.

The Lost Crypt has been a very special and inspiring project for us. Not only was it nice for us to collaborate with someone, we hadn’t worked closely with a ‘company’ in that respect, but by being a community run project we really felt like we were contributing to something with a purpose and helping them to bring more revenue to their endeavours. Aspire provides support for a group of people who really need their help.  It is such a great use of the unused space and it’s great to think of the Lost Crypt having a dual purpose.

Aspire Ryde is not your ‘typical’ workplace and it’s actually a very different vibe to how it is here in Austria. Outside of the ski season which is obviously outdoors based, we do not have such a busy interesting community with whom we interact with on a day to day working basis. In contrast, Aspire is a hub of hustle and bustle! Whilst we were building The Lost Crypt there were people all around us doing various fun things in the Holy Trinity building.

Reflecting on the design process, we didn’t actually visit the site until we started building the Escape Room. So that was quite a challenge and we certainly had to use our imagination at times – and there was also some guess work! But we received a lot of photos and videos and the dimensions of the room from Jan and JD. We created a 3D image overlaying photos onto the walls and that helped! Then Bobbie built an actual 3D model using foamboard. It helped us to understand the look and feel of the space, how we would decorate it and where we could place certain puzzles.

Saying that, when we arrived it was still quite a surprise – where certain ‘things’ had been removed, it felt a much bigger area. Unlike some Escape Rooms, the Lost Crypt has more than one room … but that’s all we can say without giving too much away!

We had to work fast and alongside builders, who ‘uncovered’ and ‘removed’ things, then we put things back together or built new things from scratch. Some items came from upstairs at Holy Trinity; Jan had been salvaging bits and pieces and we had a room full of components to trial and test.

We wanted an overall storyline to provide a focus and point of difference and incorporating the story of the Lind family was fairly easy as it was such a great fit. Jan came up with some detailed research right at the beginning and [over zoom] we were able to pitch two or three different puzzle themes. Everyone fed back what they preferred so we started building on that.

Using the background information as references, we knew of items Elizabeth Lind and the family would have used, so we tried to replicate some of these. There’s a strong naval link as James Lind and his son John were both naval Doctors so we tried to incorporate some of this story too. But some aspects were also fictious…

With our puzzles we like to combine the use of different senses. There are puzzles where you are seeing things, touching, feeling. In our other Escape Rooms, we have smelling puzzles and you can also have audio puzzles too.

The whole experience has got to be interesting for a variety of players; those who have never played, players who play all the time, to groups of two, four and six people. Once you bring in all those ‘constraints’ of what you need to develop, you start thinking ‘well this would be a really good idea at this point of the game’ so you build your path through what’s going to be physically possible for someone when they play.

We also really like the combination of mechanical puzzles and technical puzzles – although these are not necessarily always obvious to the player. Essentially with some puzzles it’s clear what you have to do, you just have to do it, which can feel like a nice win for a player when they complete it! Whereas with a technical puzzle you have to work out what you need to do and then actually do it. The actual ‘doing part’ is probably easier… but the working out what you must do first is harder!

Taking part in an Escape Room can be frustrating but watching players take part can be too! The key with any room is to work as a team, that goes for players and those running the room, giving out the clues! We’ve seen groups where one player can be very dominating and in this instance the dynamic of moving through a room doesn’t flow so well.

It doesn’t happen very often but if a player doesn’t solve a puzzle, we see this as our failure as ultimately, we have provided the ‘tools’ for them to solve it. But we’ve learnt not to be too attached to something and are always open to changing aspects of the game so it’s going to be a better experience for everybody.

On the flip side, it’s really rewarding and nice to see people do something that you didn’t expect to happen! There are people who solve puzzles in such a different way than you would ever expect, or they solve a puzzle sooner that you expect them too which is quite impressive and cool to watch. In an Escape Room you never quite know what’s going to happen!

If you haven’t played the Lost Crypt yet, or are thinking about it but haven’t booked up, just do it. It’s a really fun thing to do with your friends, as a couple, for a family or a corporate group. It’s designed for all to play!   It’s a quality entertainment and immersive experience. You don’t use your phone or devices; you lose track of time and in a way … it’s a great way to ‘switch off’! You get so sucked into what you are doing and being in the moment, you’re transported to somewhere else entirely. You might start off in the Lost Crypt … but you leave feeling like you’ve been on a real journey.’

By playing The Lost Crypt, you are also supporting other people to escape from some of life’s more serious problems, all ticket money and profit goes directly back into areas of vital need.

Registered Charity No.1163336
Built with love in Ryde 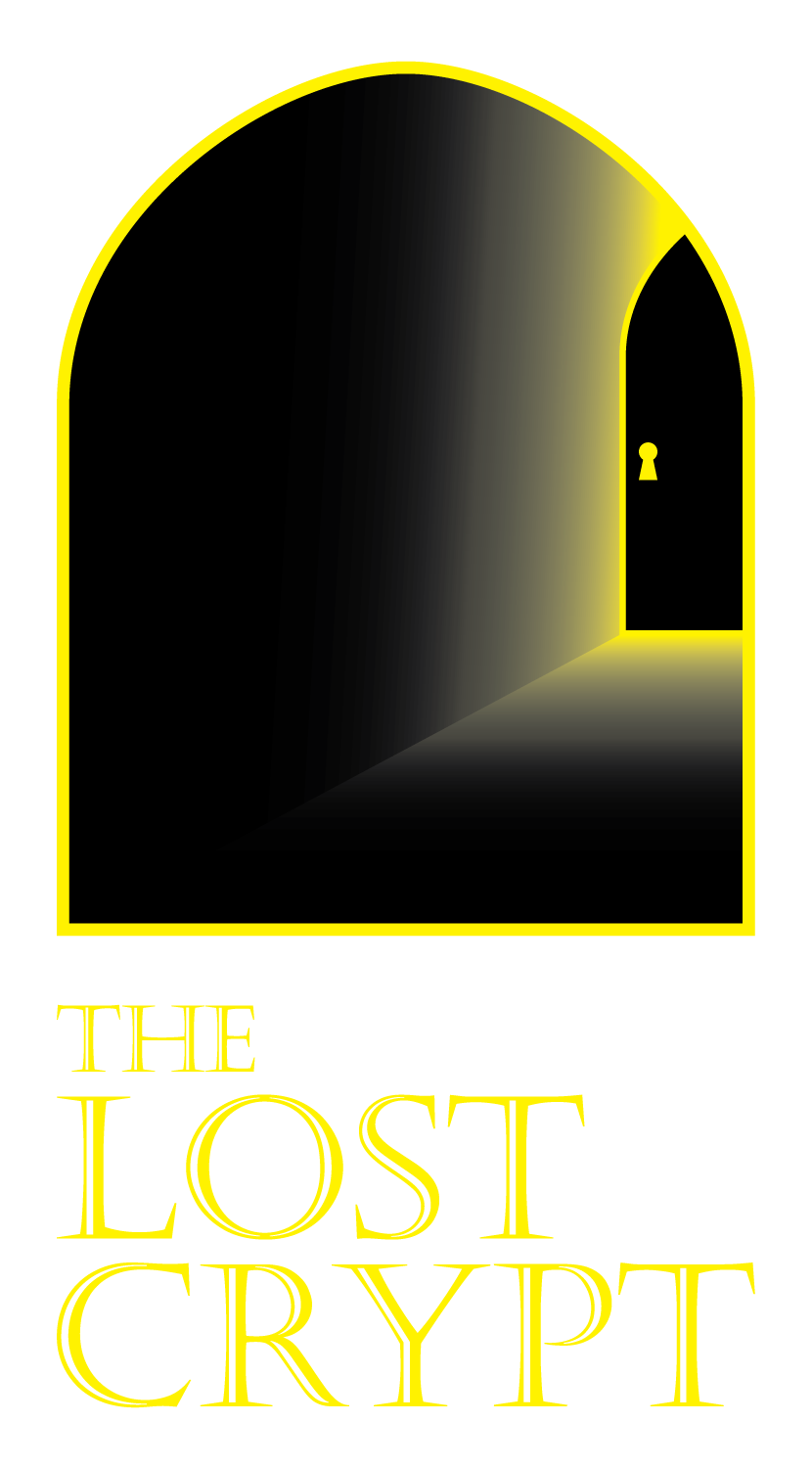 Playing our escape room also means you are directly helping others to escape some of life’s very serious problems.

The former Holy Trinity premises have been saved as a community building by Aspire Ryde, a social enterprise charity.

By playing The Lost Crypt you are supporting the important work of Aspire Ryde.  All money raised from your booking goes straight back to into areas of vital need.  This is not for profit.